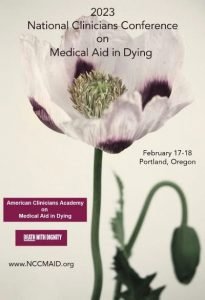 The incentive for the first, 2020, National Clinicians Conference on Medical Aid in Dying, originated from the pressing need for clinical discussions, explorations and evidence-based knowledge about aid in dying. With 10 states and Washington DC providing for the option of legally assisted deaths, some 22% of the U.S. population has gained access to medical aid in dying. It has become a significant end-of-life option. This has driven the need for increased evidence-based knowledge and clinical care — provided for the first time at the 2020 conference, now to be continued and updated at the 2023 two-day event.

There’s a lot we learned from the first conference in 2020. Clinicians were hungry for information about the direct care of patients considering medical aid in dying, and the conference more than fulfilled that hunger. Even more significant was the deeply emotional camaraderie between some 300 aid-in-dying clinicians gathered for the first time in one place at one time. We’d become so used to working in relative isolation in our medical communities that joining a crowd of deeply caring and committed colleagues literally brought some to tears. And the second day of the conference marked the birth of the Academy, to continue the work.

The American Clinicians Academy on Medical Aid in Dying and Death with Dignity are now pleased to co-facilitate NCCMAID 2023.